Having a dog is one of most rewarding experiences in the world! All dogs come from different environments and when you adopt a new dog, it can be a wonderful and challenging experience. I show you how to navigate owning and traveling with anxious dogs in this dog anxiety tutorial.

This post is sponsored by VetriScience. As always, all thoughts and opinions are my own. I only advertise with pet brands that I know and use myself.

Lincoln came into our lives at a time when we needed him the most. After a year of grief and struggles, adopting Lincoln was like bringing a ray of sunshine into our lives. Lincoln is my two-year-old German Shepherd puppy and he brings so much joy to our lives and to our household. However, he didn’t come from the best home.

When we adopted Lincoln we knew he came with a long list of issues that would concern any dog owner. The previous owners who had him before I adopted him, treated him poorly and thus from their treatment of him, he has severe separation anxiety, becomes easily stressed when traveling, and does not like being left alone for long periods of time.

I was beginning to lose hope that some of Lincoln’s issues could never be fixed until VetriScience reached out to me and asked me to try out their calming chews called Composure on Lincoln and Roxy. I purchased Composure from Amazon, and you can also purchase it from Chewy, Entirely Pets, as well as Healthy Pets.

VetriScience Composure supplements are made with calming ingredients such as colostrum, L-theanine, and thiamine to help support calmer behavior and relaxation. The best part about Composure chews is that they come in various flavors like chicken, peanut butter, and bacon and don’t affect the pet’s personality or cause drowsiness. Composure can be used on dogs and cats and can help in stressful situations such as traveling, or before going to the vet’s office, in during holidays with fireworks, thunderstorms, as well as for separation anxiety.

Before going on a hiking excursion with Lincoln and Roxy, I gave both of them a few Composure chews 30-minutes before we left. It’s great because while I’m setting up the car and getting everything packed, prepped, and ready to go, I can give both dogs a few chews and let them get settled. Although Roxy doesn’t struggle with separation anxiety, she does become reactive to other dogs, thus causing Lincoln to be reactive and anxious as well.

Right away I noticed a difference when the neighbors unexpectedly came running into our yard and neither Lincoln or Roxy reacted in any way. I loaded up both pups in the car and usually when I’m putting Lincoln’s harness on him he whines and cries, but after eating a Composure chew, I noticed how much more relaxed he was during the prepping and leaving process. He didn’t whine and he hopped right into the car, no problem.

Because of Lincoln’s size (he’s 90-pounds) he is supposed to have 2-3 chews. Pets can also safely have more than the suggested dosage, as it’s perfectly safe, according to VetriScience. I gave Lincoln another Composure chew when we arrived at the trail and he didn’t react or whine when we started hiking, nor did Roxy react to any other dogs.

It was so nice to be able to freely hike and play with both dogs in the river and not have to worry or stress about how they would react if they saw another dog. It made for a stress-free excursion for my fur-babies! I love that I can give Lincoln a couple of Composure chews before we head off to the vet or to travel somewhere and not have to stress and worry about him getting travel or separation anxiety.

My husband was also impressed when we took Lincoln to my therapy appointment and after having Composure, Lincoln didn’t freak out when I went inside to my appointment. Normally, when I go into my appointment, Shane has to take him on a mini run around the block a few times before he calms down. This past week at therapy, Lincoln was perfectly fine when I went into therapy and didn’t freak out. I came out to a happy and elated dog!

I give a Composure chew to Lincoln each time we go running and I’ve noticed his reactions are less and he doesn’t get nearly as stressed out or as anxious while driving.

You can purchase Composure and try them on your pet at the link here. We opted for the Chicken flavor as that is both pup’s favorite.

Do you enjoy traveling with your dogs? I’m looking forward to all of the travel adventures with our dogs this Spring! 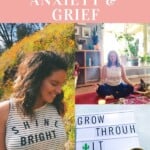 What I've Learned About Anxiety + Grief 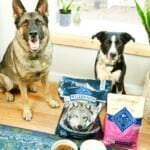 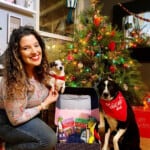 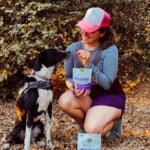