Corn Chowder with bacon and chives takes no time at all and is the best comfort food. All you need for this recipe is a Dutch Oven, sweet corn, bacon, and a few other key ingredients. My Easy Corn Chowder can be made in less than 30-minutes and tastes great as leftovers the next day!

CORN CHOWDER IS THE RECIPE FOR FALL

It's almost fall and officially the best time of the year! The leaves are changing, the weather is cooler, and although I’m still drinking my pumpkin iced coffee during the day, I’m wearing sweaters around the house at night. And you know what that means, soup time! I’ve had this silly notion that making chowders is really hard. When in fact, they aren’t hard at all.

They are actually super easy! And with corn season still being in full effect, you can make my easy corn chowder with bacon and chives soup recipe in less than 30-minutes.

All you need for my easy and delicious corn chowder is fresh corn (skip the canned stuff for this one as fresh is always better. ) If you’re local, Davis Ranch Produce has fresh sweet corn through November and it’s literally the best corn in the country! You’ll also need bacon, heavy cream, russet potatoes, shredded cheese, red onion, and chives. That’s it!

You’ll also need a Dutch Oven to make this soup taste super-rich. I find a Dutch oven is best and the longer the soup simmers, the better it tastes. We found that it tastes even better the second day. Leftover’s anyone?

YOU CAN USE FRESH OR FROZEN CORN (BUT FRESH IS ALWAYS BEST!)

Now, that I’ve conquered corn chowder, you are going to see a lot more yummy chowder recipes on my blog because they are literally that simple. Chowders are also great for nights when you don’t have to think about complicated ingredients for a recipe.

If you have fresh corn in your fridge that’s on its last legs, then my corn chowder is perfect for that. You can also use frozen corn at any time of the year.

I also suggest using arrowroot powder to thicken the soup. Because it’s chowder, we want it to be super thick and creamy. The thicker the better!

I find that using a small amount of bacon grease works to help thicken the chowder and give it an even more delicious, rich flavor.

NEVER THROW AWAY YOUR BACON GREASE

If you want to food-prep this recipe, you could prep all of the ingredients (except for the bacon) the night before and have the ingredients ready to go for when you get home. The first step is cooking up the bacon in the Dutch oven.

The bacon grease gives a delicious rich flavor to the corn chowder. Bacon grease is liquid gold, never throw it away. Use it and you’ll find it gives your dishes a ton more flavor.

How about this delicious sandwich recipe?

I store my bacon grease in a sealed glass jar in the fridge and add to it as I cook bacon. Bacon grease never goes bad! Think of it as a sourdough starter. It will last forever in a cold fridge and can be used for all types of recipes and baking needs. 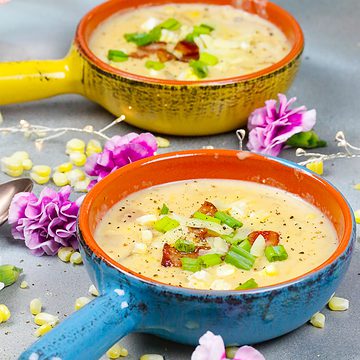 Genevieve Jerome
Easy Corn Chowder takes no time at all and is the best comfort food. All you need for this recipe is a Dutch Oven, sweet corn, bacon, and a few other key ingredients. My Easy Corn Chowder can be made in less than 30-minutes and tastes great as leftovers the next day!
5 from 67 votes
Print Recipe Pin Recipe
Share on Facebook GrowSaved!
Prep Time 10 mins
Cook Time 26 mins
Total Time 36 mins
Course Fall Recipes, Soup recipes, Easy Dinners Chowder recipes
Cuisine American
Calories 599.89 kcal 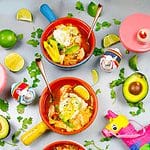 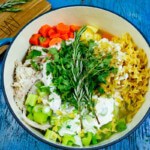 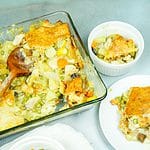 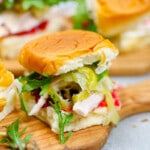